What Is the History of Solar Energy and Solar Panels? Even though solar energy has become an integral part of today’s clean energy economy, its founders, photovoltaics (PV), had a long history that introduced it to the world. During the past decade, the cost of solar has significantly decreased, making it easy to forget that going solar was a completely different concept even just fifteen years ago. Taking a look at the history of solar technology and solar energy over the past few centuries will reveal the origins of solar PV. 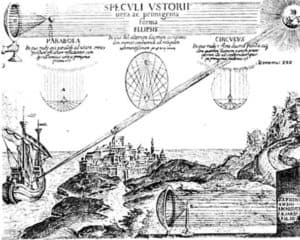 Humans have used solar energy since the 7th century B.C. We know people used sunlight to light fires using materials like magnifying glasses when history tells us that. Later, in the 3rd century B.C., the Greeks and Romans used mirrors to harness solar power to light torches for religious ceremonies. The use of mirrors for the same purpose was documented in Chinese civilization as early as 20 A.D. as ‘burning mirrors.’

In the early days, solar energy was used for constructing “sunrooms” in buildings, which are still popular today. The sunrooms used massive windows to direct sunlight into a single area. There were sunrooms in some of the iconic Roman bathhouses, typically those on south-facing sides of buildings. During the cold winter months of the 1200s A.D., Anasazi ancestors built cliffside abodes to capture the sun’s warmth.

Researchers and scientists used sunlight to power ovens for long voyages in the late 1700s and 1800s. Likewise, they produced solar-powered steamboats. There’s no doubt that the concept of manipulating the power of the sun has been around for thousands of years before solar panels became popular.

When were solar panels invented?

Solar panel technology was developed through an iterative process that involved numerous scientists. The exact date they were created and who should be credited for the invention are subjects of some debate. French scientist Edmond Becquerel is credited with inventing the solar cell by demonstrating that two metal electrodes in a conducting solution could produce more electricity when exposed to light. Later PV developments with the element selenium were influenced by this breakthrough, called the “photovoltaic effect.” Willoughby Smith discovered that selenium has photoconductive potential in 1873, paving the way for William Grylls Adams and Richard Evans Day to discover that selenium produces electricity when exposed to sunlight in 1876. Several years later, in 1883, Charles Fritts produced the first solar cells – for this reason, some historians claim that Fritts was the inventor of the solar cell.

Solar cells, as we know them today, are made of silicon, not selenium. The first solar cell will be created by Daryl Chapin, Calvin Fuller, and Gerald Pearson at Bell Labs in 1954. According to some, Daryl Chapin’s invention of the silicon photovoltaic (PV) cell was the real invention of solar panels. Many argue that this event marks the invention of PV technology, as it was the first instance of a solar technology able to power an electric device for several hours every day. Initially, silicon solar cells converted sunlight at a rate of four percent, significantly less than the efficiency of modern cells.

Solar technology was used as early as the 1960s to power satellites in outer space. The Vanguard I satellite’s radios were powered by a tiny one-watt panel in 1958. All three Vanguard II, Explorer III, and Sputnik-3 rockets were launched the following year using solar panels as the propulsion system. NASA launched the first Nimbus spacecraft in 1964, a satellite that could run entirely on a 470-watt solar array. NASA launched the world’s first orbiting astronomical observatory in 1966, powered by a one-kilowatt array.

The University of Delaware constructed the first solar building in 1973, dubbed “Solar One.” The solar energy system ran on a hybrid supply of solar thermal and solar PV power. This system also pioneered the concept of building-integrated photovoltaics (BIPV) – rather than using solar panels, the system used solar that was integrated into the roof, similar to Tesla’s new rooftop product.

Hoffman Electronics improved the efficiency of photovoltaic cells from 8% to 14% between 1957 and 1960. After the University of South Wales in 1985, the next breakthrough came when silicon cells were found to have a 20% efficiency. National Renewable Energy Laboratory and SpectroLab Inc. collaborated in 1999 to create a solar cell with 33.3% efficiency. University of South Wales researchers broke that record again in 2016, achieving a 34.5% efficiency rate.

The first aircraft powered by solar power, Solar Challenger, was built by Paul MacCready in 1981 and flown from France to England. Pathfinder, a remote-controlled solar airplane, set an altitude record after reaching 80,000 feet in 1998. A NASA non-rocket aircraft reached 96,000 feet in 2001, breaking that record. The world’s largest and most powerful solar-powered aircraft, Solar Impulse 2, completed the earth’s first zero-emission flight around the world in 2016.

Cost of solar over time

Solar panels have become much cheaper in recent decades, which has led to a surge in consumer demand which has led to more than one million installations in the United States by early 2016. Solar panels cost about $300 per watt in 1956. In 1975, this figure had dropped to just over $100 a watt. Solar panels can now be purchased for as little as $0.50 a watt. Since 1980, the price of solar panels has fallen by at least 10 percent annually. Solar’s plummeting costs have contributed to the growing popularity of the technology as well as the legitimacy of PV as a reliable energy source in modern society.

Solar power has a robust and fascinating history, regardless of why you find it interesting. Solar has a wide range of meanings today. The industry spans various industries and provides power to hundreds of different gadgets and technologies. If you are looking for a solar company in Southern California, Sunline Energy can help. You can save so much by going solar. Our estimators will go over your energy bills and to over all of your solar options. All of our solar installations come with a lifetime warranty, one of the best in the industry. Contact us today by calling (858) 252-2280 or fill out the contact form here.