The Pros and Cons of Going Solar Solar is one of the most ample sources of energy on Earth. It’s captured in various ways, and can be used as a renewable energy source. There are 173,000 terawatts of solar energy that strike the Earth at any time – that is about 10,000 times more of what the Earth needs.

How Does Solar Energy Work?

Our sun is a natural nuclear reactor. When the sun hits the earth tiny packages of energy called photons are released, which can travel 93 million miles from the sun to the Earth. Solar energy is a source that is responsible for all of our energy sources and weather system on Earth. Enough solar radiation hits the planet to theoretically be able to fill our global energy needs for a full year.

In the Sun’s core, there are nuclear fusion reactions that produce a large amount of energy that radiates from the Sun’s surface and into space in the form of heat and light. The solar power that is harnessed can be converted to energy using solar thermal or photovoltaics collectors. Unfortunately, solar energy only accounts for a fraction of our overall global energy use, the lower cost of installing solar panels means there is an opportunity for more people to switch to renewable energy.

There are various ways to use energy that is produced from the sun. The main ways it can be harvested into energy are solar thermal capture and photovoltaic. Solar thermal capture is mostly used for electricity production for massive scales in solar installations and photovoltaics are mostly used for smaller projects such as residential or business solar panel installations.

Solar energy is one of the best sources by being the cheapest and fastest growing. It’s constantly growing and improving. It will also continue to grow rapidly in years to come. There are many great benefits of adding a  solar system to your home, you will improve the environment lower your energy bills and enjoy other perks that solar has to offer.

Another popular way to use solar energy is to capture heat from the sun’s radiation directly and use it in different ways. Solar thermal energy has a range of uses compared to photovoltaic systems, but thermal energy usage at a small scale is not practical.

Mid-temperature solar thermal energy incorporated in solar water heating systems. Heat from the sun is captured by some collectors on the rooftop. The heat then transfers to the water running through a pipe so there is no need to rely on conventional water heating processes, such as water heaters powered by gas or oil.

High-temperature solar thermal energy systems are typically used for generating electricity on a bigger scale. In a solar thermal electricity plant, mirrors focus the sun’s rays on tubes containing a liquid that holds the energy. This fluid is heated and can be used to turn into steam, which then is used to turn a turbine and generate electricity. This is usually called concentrated solar power.

One way homeowners can take advantage of solar energy is with a photovoltaic (PV) solar system. The solar panel system converts the sunlight into electricity that can be used immediately.

The process known as the photovoltaic effect is when the solar panels convert solar energy to usable electricity. Sunlight strikes a semiconductor material and knocks electrons loose, setting the electrons into motion and generating electric current that be captured with wiring. This current is known as direct current (DC) electricity and must be converted to alternating current (AC) by using an inverter. The conversion has to happen because the U.S. grid operates in AC electricity.

Installing solar panels is a smart way to capture solar energy and a great way to save you money on your electric bill while gaining some independence from your local utility bill as well as fossil fuels. Business owners can also greatly benefit from installing photovoltaic solar panels in their businesses. 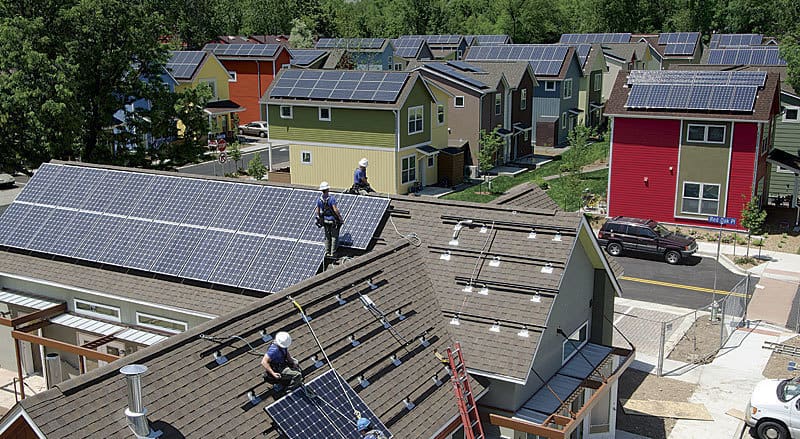 Everyone can play a role to play in combating climate change. Whether driving an electric car or going solar with a home energy system, we can make consumer choices that have a positive impact on the future health of our planet. New green technologies offer increasingly affordable solutions to dirty energy problems that so many people face. Solar energy is currently the most popular way for home-owners to save huge while generating green energy for their homes. If you haven’t gone solar yet, now is the time to start weighing the pros and cons of solar energy to see if it’s right for you.

The main reason most people go solar isn’t to necessarily better the planet, it’s to save money. If you can keep utility costs down while generating energy that is better for the Earth that’s a win-win! Solar energy systems typically have a lifespan of 20 to 30 years. By going solar you reap the benefits for decades to come. With energy costs rising across the country, taking control of your energy costs is the smart way to seize control of your utility costs.

In addition to saving money by lowering utility bills, going solar will increase the value of your home. Going solar isn’t just about saving money immediately, though there certainly is that benefit. It’s about creating a dynamic benefit that pays off in more ways than one. Solar energy systems are a long-term investment in your home and family. It’s a simple solution to provide cheaper, reliable energy to your family while growing the equity in your home.

You too can contribute to the cause of leaving a cleaner, greener world for future generations. Going solar leads to a dramatic reduction in the amount of waste create and fossil fuels burned. Quality solar panels last for upwards of 30 years, meaning your investment in solar will pay dividends for decades to come. By making the United State less reliant on fossil fuels it gives us more freedom as a country to make decisions that take the environment into account.

Not for Every House

It’s not your fault, it’s your roof! Getting a solar energy system typically requires mounting large solar panels (known as “racking”) across your roof. Certain roofs can be difficult to mount panels on due to the type of roofing materials. Others have skylights or decks that present different barriers to installation. Additionally the position of your home affects its ability to generate energy. Surrounding trees, the resting angle, and the space available for panels all need to be taken into account. Some people have invested in ground-mounted solar panels to circumvent roofing issues, but roof-mounted panels are still the preferred method of installation.

The financial benefits of owning a solar energy system are not immediate. The average length of time to recoup an investment when going solar is seven and a half years. If you are planning on moving in the near future than going solar might not be the most ideal solution depending on the financials.

Not for Every State

The biggest benefit of going solar is the reduced utility costs. If you aren’t running a high utility bill in the first place, then the benefits from going solar won’t be as high in return. In States like California or Hawaii where homeowners pay double (or more) the average electric rate, solar is an attractive solution to a common problem. In Louisiana, where the cost of electricity is far lower than the national average, the savings will be considerably less.

Conclusion of Pros and Cons of Going Solar

Solar energy isn’t a recent fad, it’s a clear sign of the growing trend to utilize technology to improve our lives and save our planet. If you are in a State with lots of sunshine, have the right roof, and don’t plan on moving soon there is almost no reason why you shouldn’t be exploring solar as an energy solution.

What are your costs and benefits of going solar?  Contact us today for a free consultation.
Sunline Energy has installed over 50,000+ solar panels. We are considered to be one of the most trusted solar companies in San Diego. You can check out some of our customer testimonials here.

Considering Solar Energy for Your Home

The best way for homeowners to save money with solar power energy is to install a solar photovoltaic system. To find the perfect system at a great price, request your free estimate from Sunline Energy. We are proudly one of the most trusted solar companies in San Diego. Once you request your estimate from one of our solar consultants will ask you a series of questions and expect your roof to make sure it’s in good condition. They will then provide you with a quote that will meet your energy needs.