The Benefits of Micro-inverters 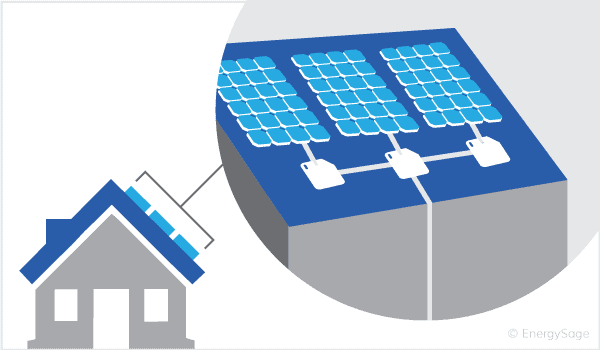 Due to the efficiency and the future of solar,  many people believe that Micro-inverters could replace string inverters in solar installations.  At Sunline Energy, we certainly feel that micro-inverters show a lot of promise.
There are several factors that determine if micro-inverters are the way to go: the return-on-investment for solar PV systems: total capital costs, the amount of power harvested from the system over its lifetime, and the maintenance costs.

In conventional PV solar installations solar modules are wired in series then connected to a string inverter that converts high voltage DC from array of PV modules (panels) to AC for connection to the electricity grid.

A different solar PV system architecture based on micro-inverters is growing in popularity due to the longevity and other benefits of micro-inverters. Here, a small inverter is attached to the rack behind each solar module to convert DC to grid-compatible AC.

The solar benefits of micro-inverters

The reason for the growing popularity of micro-inverters is simple – for a given solar installation they provide up to 20 per cent improvement in price/performance over the life of the system compared to existing inverters.

With micro-inverters, shading of one module does not degrade the performance of the others and more power can be extracted from each module through an electronic technique called Maximum Power Point Tracking (MPPT).

The output of each module varies with the incident light level. MPPT ensures that the micro-inverter presents the optimum load to the module under these varying conditions in order to extract maximum energy from it at all times.

This technique cannot be applied so effectively in systems with series DC strings, where shading from any source, such as tree branches or even something as small as an antenna or vent pipe, can dramatically reduce the total energy produced by the installation.

On a cost-per-watt basis, micro-inverters cost a little more than string inverters but this is more than offset by greatly simplified installation – no specialist high voltage DC equipment, wiring or installer skills are needed. There are no risks from lethally high DC voltages, making the systems safer for installers to work on. System design and planning is also greatly simplified as one size micro-inverter can be used for various types and sizes of installations. Fire risk from high voltage DC arcing is eliminated, as is the electrocution risk to firefighters in the event of a fire.

String inverters usually have 5-10 year warranties and need replacing at least once or twice during the lifetime of a system, adding cost, eating into profits and upsetting customers.

The latest micro-inverters are warrantied to 25 years but designed to deliver a life expectancy in excess of 25 years, matching that of solar modules.

A wireless monitoring system provides real time performance information for each solar module in order to maintain the high performance of the solar PV system throughout the operating lifetime. From your computer or smart phone you can monitor the production of each individual panel, this might help you discover a tree branch is causing shading and other tools for performance monitoring.

In short, micro-inverters have the potential to replace string inverters in most domestic and commercial installations over the next few years because they offer numerous meaningful advantages for consumers and installers alike: they are simpler and safer, maximize energy harvest, increase system lifetime and reliability, simplify PV array design and installation, and enhance system monitoring capability.