Are These Solar Power Myths Holding You Back Part 6? 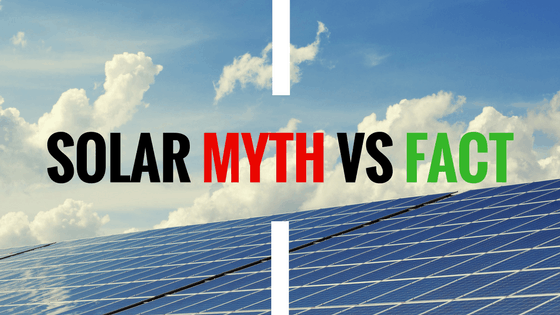 A few weeks ago, we published a highly successful 5-part series on San Diego solar power myths.  These posts covered some of the most popular misconceptions preventing homeowners and businesses from “going solar.”

The feedback from this series was fantastic.  And we received a number of requests to grow the list.  So we decided to publish 5 more common solar myths.

We hear variations of this one all the time.  “Solar energy can only exist with the help of generous government subsidies and handouts.”

This particular solar myth is only partially true.  But it’s also 100% irrelevant.

All Energy Is Subsidized

Pretty much all energy technologies are subsidized – even oil, gas, and coal.

Check out these articles:

If you’re short on time, these 3 infographics will blow your mind.

And remember that were only talking about direct subsidies.  There are also tons of indirect subsidies that help to make fossil fuel artificially more competitive.

These are all incredibly generous subsidies and incentives that are paid for with US taxpayer money.

But probably the biggest subsidy of all?

Many oil, gas, and coal companies are allowed to “externalize” costs that the rest of us have to pay for.  We’re talking about:

Although all of these activities take a serious toll on our bodies and on the environment, Big Oil doesn’t have to account for these costs on its balance sheet.  This is why gas is relatively cheap in the US.

So the notion that solar is heavily subsidized is largely irrelevant.  Oil, gas, and coal receive way more money – both in direct and indirect subsidies.

But the claim that solar can’t survive without government help is also slightly inaccurate.  Let’s review.

It’s true that solar energy has benefited from a range of incentives, grants, and tax credits over the years.  And without this government assistance, the transition to a sun-powered economy would be much slower.

But the transition would still happen – with or without government assistance.  And here’s why:

As a result of these 2 converging trends, many regions of the world are already at or approaching grid parity – the point at which solar electricity and grid electricity are the same price.

In San Diego, for example, solar is already cost competitive for the average homeowner – even without subsidies.

That we also happen to have terrific incentives (i.e. government subsidies) makes an easy decision even easier.  But be warned – many solar incentives are set to expire in the months and years ahead.  So it pays to act now.

Tune in Tomorrow for the Next San Diego Solar Power Myth

We hope that you enjoyed this post about energy incentives and “government handouts.”  Be sure to check out Part 7 of our continuing series tomorrow.

In the meantime, if you’re in the market for a solar installation (and you want to take advantage of the “free” government money while it still lasts), contact us today for a no-obligation quote.  You don’t pay a dime to begin exploring your solar options.